You may have seen on the news recently that next Tuesday, there is going to be a near Earth object passing us by.
https://www.bbc.co.uk/newsround/59963475

It will be passing The Earth on the 18th of January, travelling at passing us by at a huge distance of 1.2 million miles (2m km).
That’s over 4 times the distance of The Moon.
This is almost the same distance that The Webb Space Telescope will be once it reaches it L2 orbit.
So there is no chance of it hitting us.

But there is a chance we may be able to spot it as it passes us by.
NASA’s Horizon Web Tool will enable you to generate positions and magnitude estimates from your location.
https://ssd.jpl.nasa.gov/horizons/app.html#/

I have used these Orbital Elements to add the object into the planetarium program C2A to produce the maps below showing where it will be. 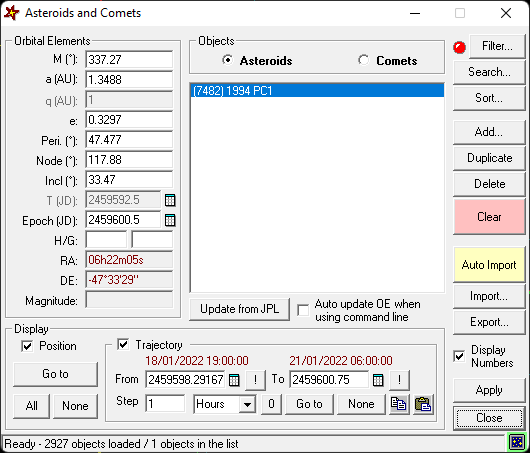 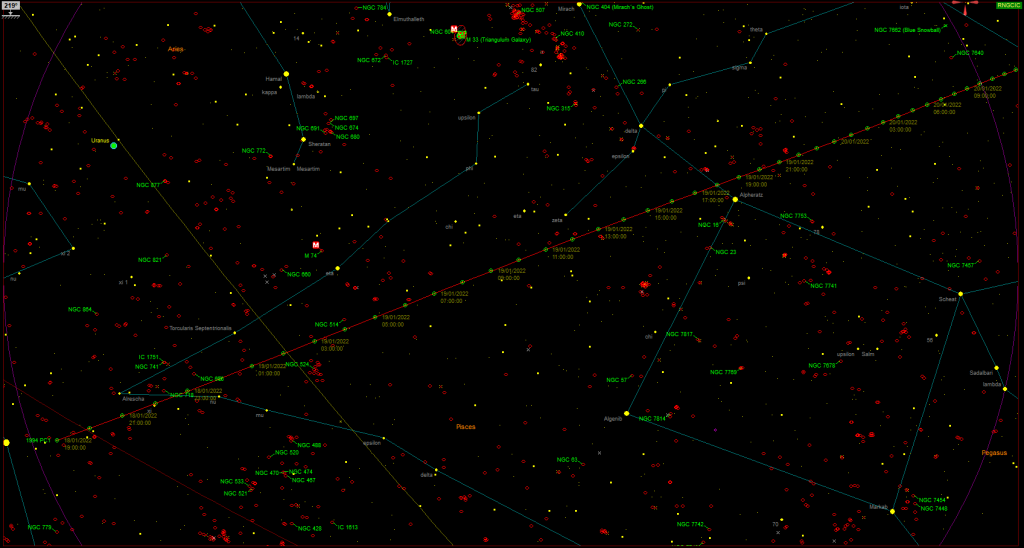 Before the evening of the 18th, 1994 PC1 is going to be too far south to be seen from the UK in the constellation of Eridanus.

Our first chance to catch the asteroid occurs this evening.
It will be at its highest at about 18:30h UT, when it will be about magnitude +10.4, moving through the body of Pisces.
So it should be bright enough to catch it slowly moving through the background stars with a fairly small telescope.
Doing a long exposure of its position should reveal the object as a small trail due to its relatively fast motion.

By 21:00h UT it will be passing just to the west of the 4th magnitude star Alrescha.
But by this time it will only be 28 degrees above the horizon.
It will set from central UK by 0:28 UT.

Map 2. 19th – 20th of January 2022.
The next evening on the day of closest approach as it gets dark, we catch up on it in the constellation of Pegasus.
It will be close to the 2nd magnitude star Alpheratz, 61 degrees above the horizon.
This is the top left star in the Square of Pegasus, so this nice landmark should make it a bit easier to find.
The magnitude will how have dipped to about +11.5.
7482 made its closest pass to Earth earlier that day, so the brightness is fading and it has started to slow down as the distance from Earth is increasing.
Throughout the night, it progresses in a north western direction, fading and slowing down as it goes.

Map 3. 20th – 21st of January 2022.
The next evening as darkness falls, we catch up with it within the constellation of Lacerta, 57 degrees above the horizon.
It will now have faded to about magnitude +12.5.
Lying in an indistinct constellation like Lacerta, and being so faint and now moving slower, this will make it a bit harder to pick out amongst the background stars.

Map 4. 22nd – 24th of January. On into Cygnus.
By this evening, the asteroid’s apparent motion has slowed right down as it enters the north part of Cygnus.
It will now have faded to below magnitude +13 and will be about 51 degrees above the horizon as it gets dark. 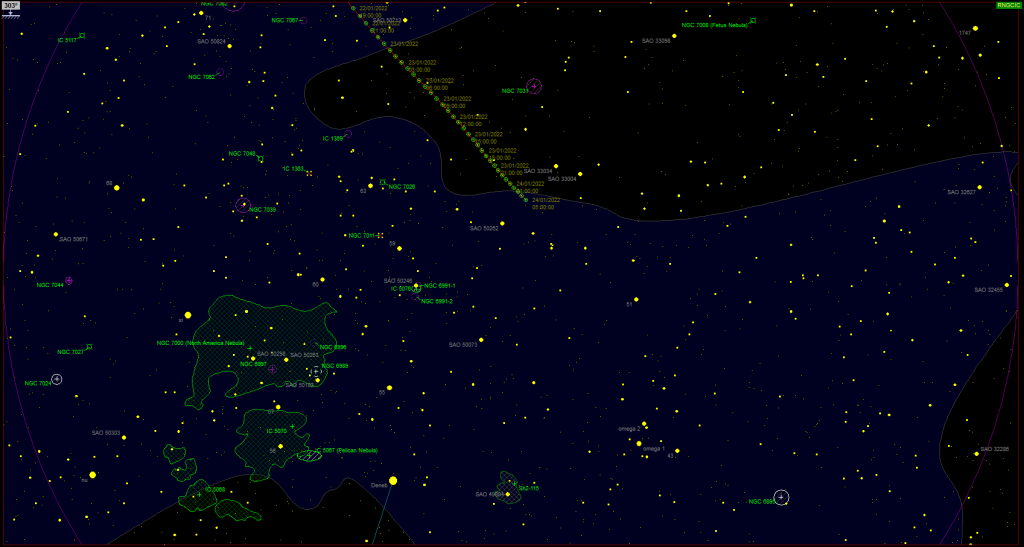