Every now and again something slips under your radar.
Something so seemingly innocuous has a habit of biting you where it hurts.
Let me explain.

I’m always on the lookout for great visual observing opportunities and love getting other people to see them.
Spacelink was one of my slips.
I was aware that it was going to launch on Friday, but I was so busy that I didn’t check the circumstances of the launch.
I knew it was launching 60 small satellites into orbit, but we’ve seen multiple launches before with the SatCubes, so nothing to report here!
So I thought.

Had I checked the launch time, we would have been in prime position to see the rocket as it came over about 20 minutes after launch.
That would have been fabulous to see in itself, what the events that followed were even more spectacular.

Once the string of satellites were deployed an hour after launch, reports started to come in about the satellites being visible from the ground as a string of bright lights moving across the sky.

See this video taken by amateur astronomer Dr. Marco Langbroek (sattrackcam.blogspot.com) as they streaked over the Netherlands:

It is said that they are going to get a lot fainter as they move away from Earth into their higher orbits.
This is when doubts about what was happening here first started to echo in my head.

So what is Starlink?
It is going to be a global Internet network.
This SpaceX (Elon Musk) launch is the first 60 of a proposed 12,000 network of satellites.
They have been launched by SpaceX, Elon Musk.
It will take about 10 years to launch the rest of the satellites into orbit.

SPaceX aren’t the only company looking to launch a network of satellites.
OneWeb, Telesat amongst them. The most ambitious being Amazon’s planned network of 3,200 satellites.

Considering how spectacular the Starlink constellation appeared, it looked like it would be well worthwhile getting out to see before the satellite string starts drifting apart.

I started to look at the possibilities of them being visible from the UK, managing to produce some preliminary potential timings when it would be visible.
So I posted those on my Web page and social media on the Saturday.

It looked like others were interested.
At the end of the day, I had 1,682 visitors to my Web site.
Unfortunately Saturday night was cloudy for me.
Some people in the UK spotted it and said the satellites were about 4th magnitude, so still visible to the naked eye.

Undeterred, I produced some more timings for the Sunday evening / Monday morning and posted those online.
Luckily for most, being a Bank Holiday it wasn’t a school night.

The earlier appearance wasn’t optimal, as the sky was still fairly bright.
It could just about be seen without optical aid, but the appearance in binoculars was stunning.
A string of bright satellites following one another in the eastern sky.
They got brighter as they got lower and then faded completely.

Nothing spectacular, but it was nice to have been able to see them.

The spectacle I witnessed at 00:09 was incredible.
I set up my cameras to take some images.
I knew what the ground track was, but wasn’t completely sure of the track in the sky, so it crept up on my, fainter than I expected and lower in the sky.
Each individual satellite was visible to the naked eye. The string very evident stretching across many degrees of the sky.

Below – The Starlink Satellite Train I captured. 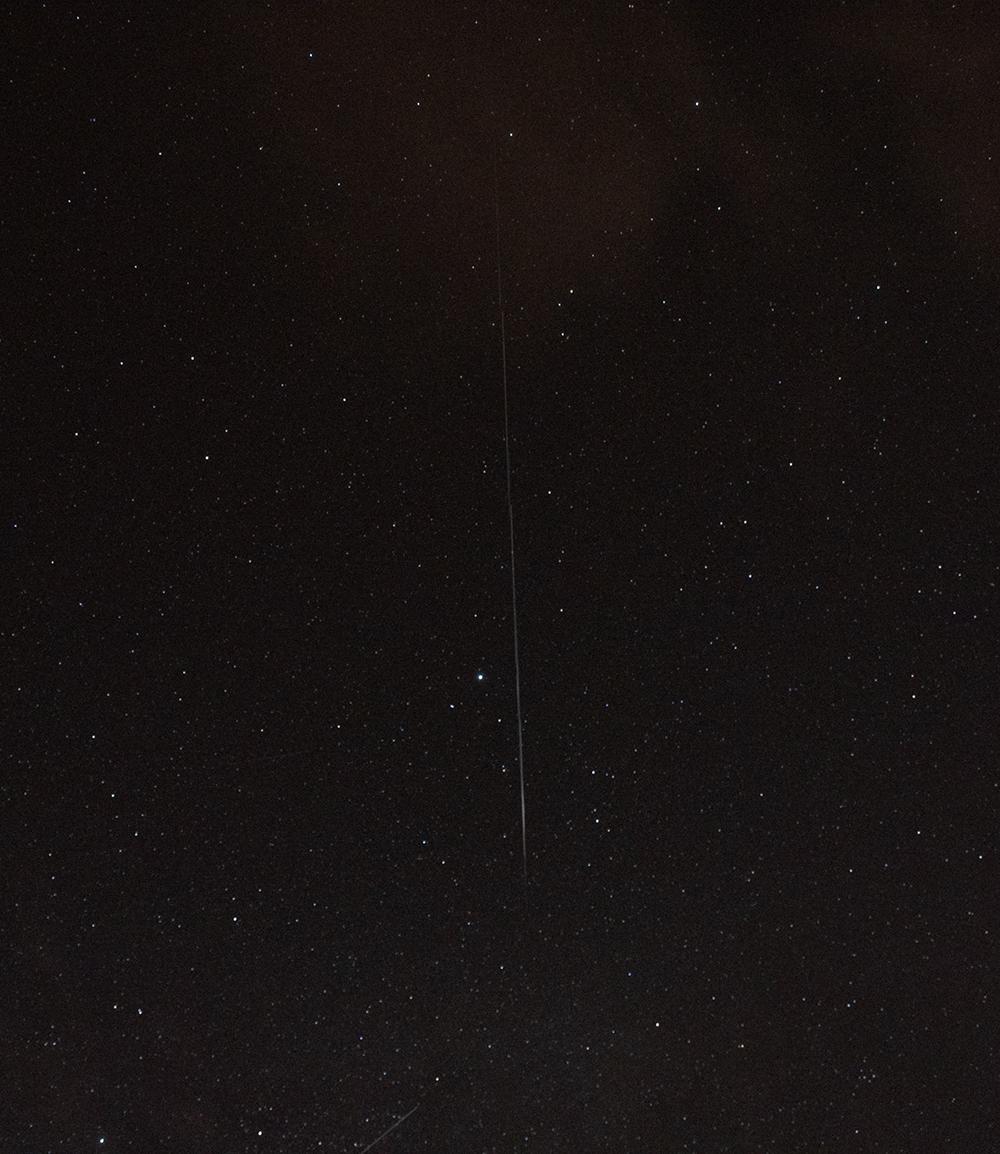 It gradually got a bit brighter as it got nearer.
I took some pictures, and then after it passed over, it passed just north of Corona Borealis and went towards Lyra.
That’s when things got really exciting.

The angle between The Sun, satellite and me must have been just right.
As each satellite passes a particular spot in the sky, it produced a bright flare.
We got used to this with the Iridium satellites, but this was Iridium’s on steroids.
One after another the satellites flared, producing a spectacular glittering display in the east north eastern sky.
WOW!

Below – One of the flares I captured. 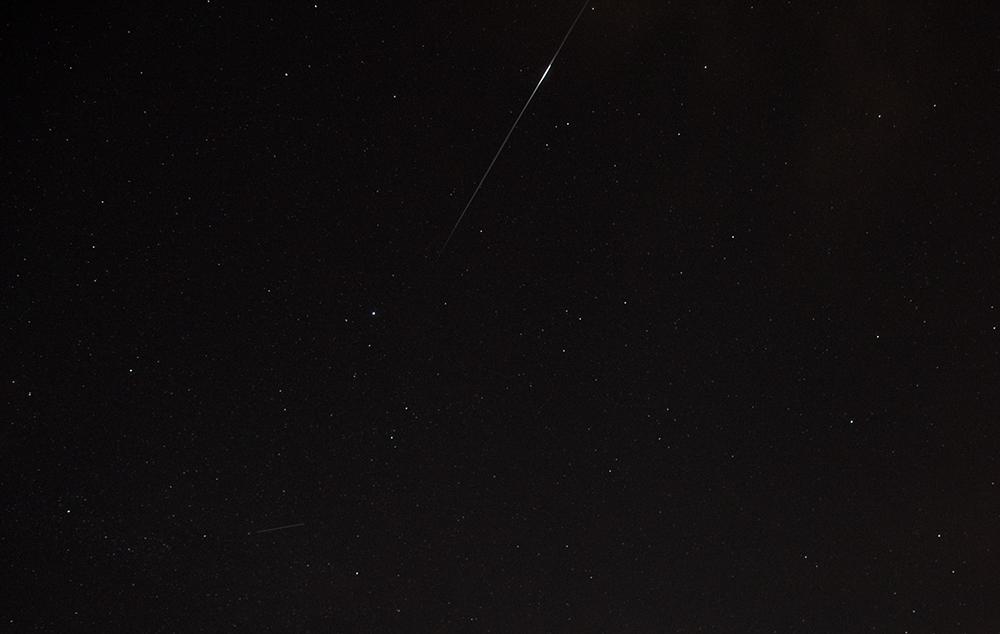 Texts and posts from friends showed that they had also witnessed this amazing spectacle?

But what did we actually witness?
Yes, this is an amazing achievement, launching so many satellites at once, reducing costs drastically.
For what? Global Internet Access. Good grief, do we really need it?
A lot of people are almost turning into online addicts, so can’t we just preserve places where we can truly get away from it all?

Talking of preserving, we talk a lot about light pollution. Yes, I know, it didn’t take me long…
Online posts are showing a big trend of amateur and professional astronomers now up in arms, quite rightly, that this could ruin the night sky.
If these satellites continue to remain as bright as they are, it will ruin many a night sky image.

The satellites can only be seen if sunlight reflects off them.
In summer months, this happens throughout the night. The Sun is only just below our northern horizon at midnight, so although we are in darkness, they are still in direct sunlight.
In winter, the satellites will be hidden within the Earth’s shadow, so should not be seen when the sky is properly dark.
However, for two hours either side of sunset, the satellites will still be visible glinting in sunlight, whatever the time of year.

There was an outcry many years ago, when the Iridium satellites were launched. If the angle was right, one of the three highly polished panels, reflected sunlight to produce extremely bright flares. We came to love these Iridium flares, but these only occurred infrequently. Sadly they are being de-orbited and the last of them will soon be gone.

With the Starlink satellites there are planned to be 12,000 of the little blighters.
These will be spread around the globe evenly, so at any one time, some people have estimated, there will be more satellites visible in the night sky than naked eye stars.
Alarm bells were definitely ringing when I heard this.

So perhaps this weekend we didn’t just witness a spectacular display.
It could it have been the death knell of our rapidly disappearing night sky.
It has been reported then Elon Musk stated that the satellites won’t be visible in a dark sky.
But they definitely are visible. We’ve seen them!

Whether they will remain permanently visible, remains to be seen.
Will this sudden increase in space “junk” make low earth orbit more hazardous?

It’s too early to say as the satellites aren’t yet in their final orbits.

Let’s not dampen the moment for now.
This first launch is up there and we can do nothing about it – YET!

So just get out there and enjoy this spectacle while it lasts.
We’re keeping our fingers and toes crossed that it doesn’t turn out to be as bad as some predict, as the many satellites settle into their intended final orbits.

But if it does turn bad, it’ll be time to start a global campaign to get Elon Musk to de-orbit them and give us back our pristine dark skies.
Elon has already tweeted this morning that he’s already started to discuss this problem with the engineers.
But whether they do something about that impact remains to be seen.

4 thoughts on “Starlink – What have we just witnessed?”