New LORRI raw images from New Horizons can be viewed at the URL below fairly quickly after being returned, so it is always worthwhile keeping a look out for new ones.

My full account of the encounter is below the latest news.
I am keeping this as up to date as possible as new data and images come in.

1st February 2020.
Still no new details or images being distributed by the team.
The new link for the images is here:
http://pluto.jhuapl.edu/soc/Arrokoth-Encounter

13th November 2019.
Well, this is getting extremely frustrating now. No new images or data released for ages.

A few days ago I Tweeted Alan Stern, Principal Investigator for New Horizons, when we would be seeing something new, but so far he has not responded.

19th August 2019.
There’s still not been much data or many pictures released of Ultima Thule for quite a while now.

I know it will take a long time to download all the data, but it’s very frustrating waiting for news.

It’s been very quiet for a while again. They are still downloading data.
Some of the preliminary results from the Ultima Thule flyby have now been published in the May edition of Science magazine:

There’s been very little information for quite a while now. Very frustrating!

I saw a quick report saying that the scientists are puzzled at to why Ultima Thule is so “lumpy”.

But that’s it at the moment.

19th March 2019.
Well, it’s been a long wait with no news forthcoming for quite a while.

Alan Stern was at the Lunar & Planetary Science Conference in Texas yesterday getting people up to date.
The Webcast of the New Horizons team presentation is here:
https://livestream.com/viewnow/lpsc2019/videos/188859772

Here’s the latest news:
New Horizons achieved a 100% successful flyby and data capture at Ultima Thule.
Ultima Thule’s surface is covered with a substance called Tholin’s.
This gives Ultima Thule it’s red colour.
This is the same substance that gives Pluto’s main moon Charon it’s red pole.
These tholin’s appear to be settling on Charon and originate from Pluto itself.

Methanol, water ice and organic molecules have been detected.

Most craters are smaller than 1km.
These could have been formed from impacts, alternatively they could also be sublimation pits.
The big crater on Thule has been unofficially called Maryland.

They still do not know exactly how Ultima & Thule were formed to produce the flattened profile of the two lobes.
What is known that once formed independently in orbit around one another.
The two lobes have different compositions.
The two lobes came together relatively slowly at about walking speed before merging.
The merger speed had to be less than 10 meters / second.

A geological map has now been released showing the different components of the two lobes.

This appears to show the different “lumps” that came together to form the two bodies before they became one. 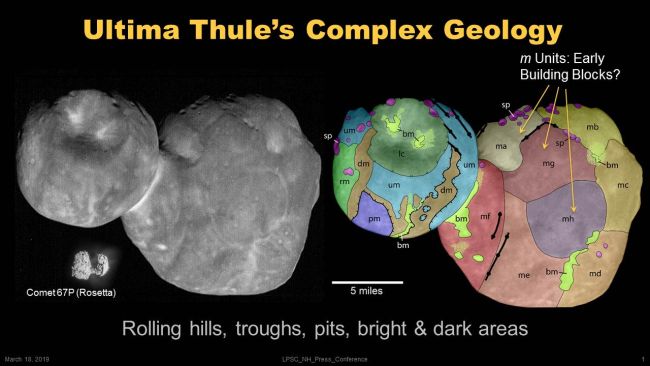 There is very little damage to any of the lobes, so the object is in a fairly pristine state.
Most stress marks seem to be in the neck region as a result of the moment where the two objects came together.

New Horizons is in good health, it will be imaging and measuring distant Kuiper Belt objects but no-where near as close as it did to Ultima Thule.

The probe has lots of fuel left, so they are hoping to extend the mission further, to fly pass another Kuiper Belt object.
A reachable new target has yet to be identified.

Hubble and other telescopes may not be powerful enough yet to find such a faint object so far away from Earth.
The probe has enough fuel left to perform a few orbital corrections to achieve another fly-by, but needs a new target.
The team are hoping to use the New Horizons cameras to image the sky and find any potential objects it may be able to reach. 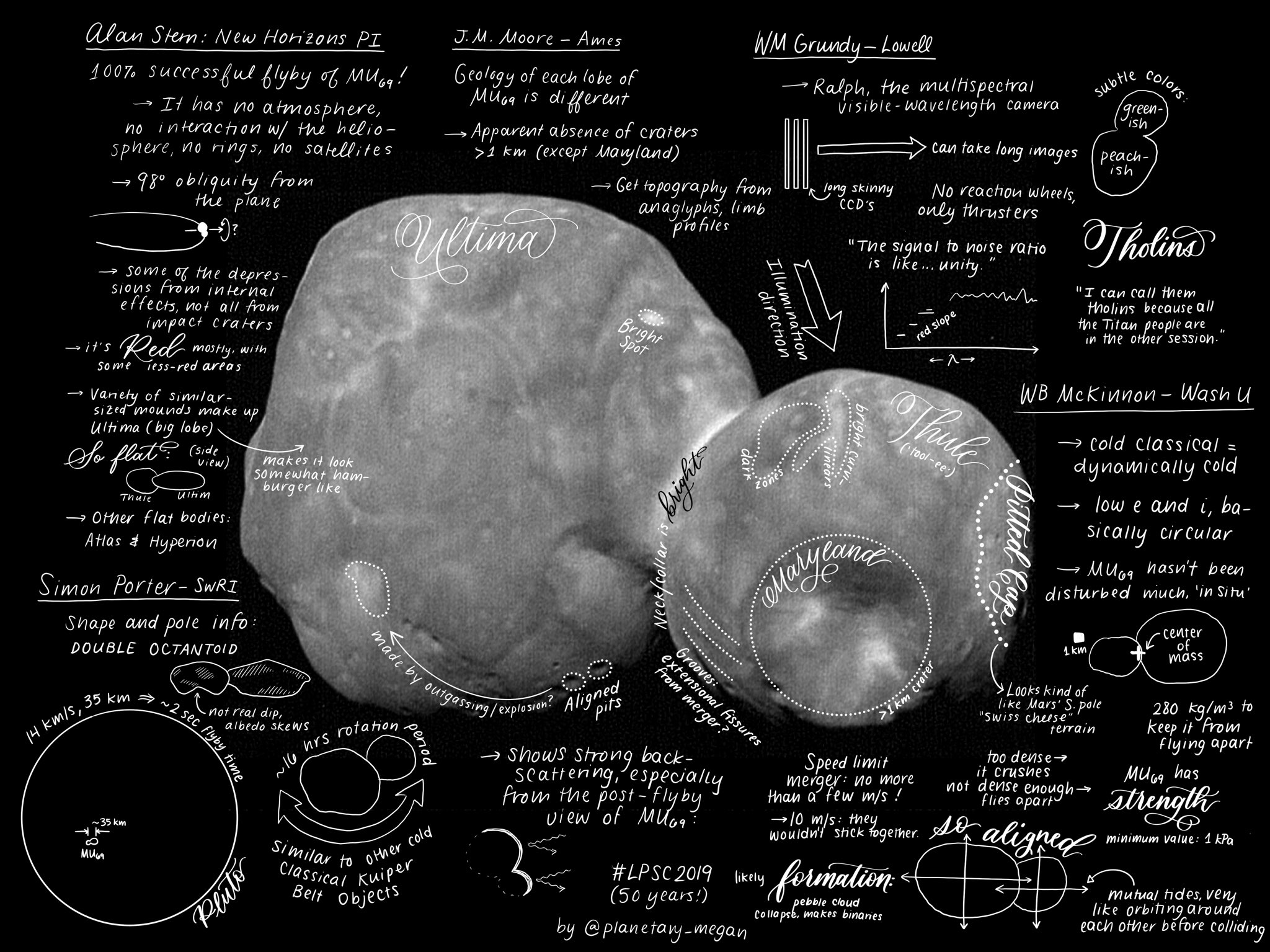 8th February.
Looking at an animation a few weeks ago I commented that Ultima Thule looked slightly flattened. Seems like my suspicions were indeed correct. This Web page tells all:
http://pluto.jhuapl.edu/News-Center/News-Article.php?page=20190208

31st January.
Very frustratingly, few details and images have been released recently.
However, I forgot to post this higher res image, which was posted on the 24th of January, showing Ultima Thule in much greater resolution, and with the sunlight at a slightly shallower angle, so that more detail can be seen.
I think it looks like a grumpy jelly-baby.

Even higher resolution images are to follow.
We wait with much anticipation.

16th January.
Some animations of the approach to Ultima & Thule were released by the team.
See full article here:
http://pluto.jhuapl.edu/News-Center/News-Article.php?page=20190115

Animation of images scaled to be the same size. This shows the rotation really well.
You can see the difference in resolution of the images as New Horizons got closer.

Animation of images at actual image size.
This really shows how the apparent size gets bigger as New Horizons approaches.

Montage of all the images.

The New Horizons team have announced new images now being downloaded.
They will appear on the LORRI raw image Web site linked below very soon.

12th January.
Spotted this in a flea market.
Appealed to my sense of humour and made me chuckle. 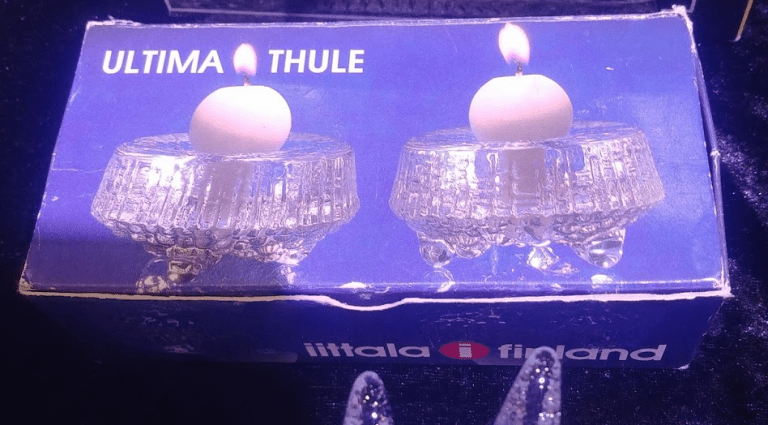 10th January PM.
I just found out that data is now being downloaded from New Horizons since passing solar conjunction.
So expect some new images and info from the team very soon.

10th January AM.
There will be a slight pause in data being returned from New Horizons until the 10th of January.
This was expected as it will be in conjunction with the Sun throughout this time so data cannot be downloaded at this time.

4th January.
I will update this page above the story as more images and data are returned over the next 20 months.

On New Years Day 2019 New Horizons (NH) whizzed past a remote speck way out in the solar system, 2014 MU69. The NH team have nicknamed it Ultima Thule (Distant places beyond the known world). When a new target for New Horizons was suggested, no objects were known within range on its current trajectory, so The Hubble Space Telescope looked for and found this suitable target.

Launched from Cape Canaveral atop an Atlas V rocket in January 2006, New Horizons left Earth at 36,400 miles per hour (58,500 km/h) becoming the fastest probe ever launched. NH took over 10 years to arrive at Pluto, passing about 0.8 million miles (1.3 million km) from asteroid 132542 APL in June 2006. Passing and imaging Jupiter and some of it’s moons in February 2007, it gained a helpful and significant gravity assist, which sent it on towards Pluto.
Just to note, that despite this great speed, New Horizons will never catch Voyager 1, which will always remain the most distant man-made object.

In July 2015 NH shot past Pluto and its moon system, travelling so fast, there was not enough fuel to slow the spacecraft down to hang around.

So here we were over 3 years later approaching another object. Ultima Thule.
A short while before the encounter, NH was sent into a pre-programmed routine to capture its data and images. As with Pluto, NH could not be slowed down and had a single opportunity to carry out it’s mission, as it passed 2,200 miles from Ultima Thule.

While NH is gathering it’s data and exploring Ultima Thule it cannot communicate with Earth.
The team would have to wait for the data-gathering to end and then NH would turn itself around to point its antenna back to Earth and report back in. The team were hunched over their screens awaiting this signal announcing that NH had survived the encounter. 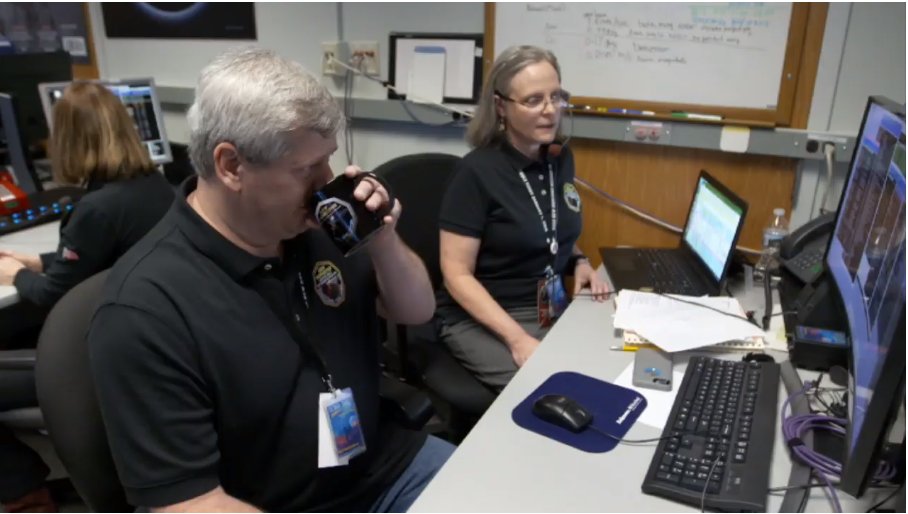 After a very tense wait, NH telemetry was received at the expected time and signal lock achieved. NH was safe. Most importantly of all, this data showed that the precious scientific data and images had been gathered and were safely stored in it’s memory.

Now the encounter had finished, this data would start to be transmitted back to Earth. With a data speed of only 2,000 bits per second, it would take around 20 months for all the data and images to be returned from that distance.

Data from NH being received by the Deep Space Network antenna in Madrid.

On New Years Day 2019, we all waited with bated breath for a NASA News press conference which would show us some of their preliminary results.

Alan Stern and some of his team at the NH Press Conference on New Years Day.

And here’s what they revealed. 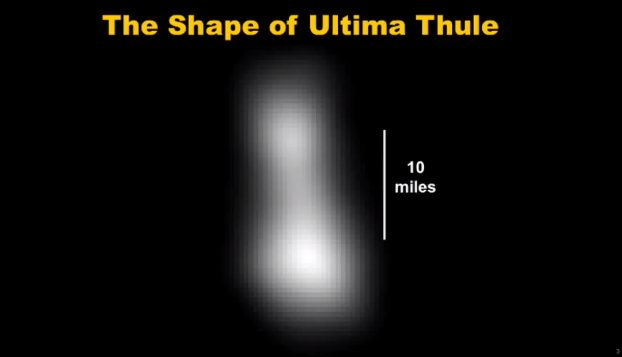 This was an image snapped and returned just before the pre-programmed data and image capture. It looked like it was bowling skittle shaped. 10 miles in height.

They proposed it had either a 15 hour or 30 hour rotation period. It turned out later to be the shorter figure. 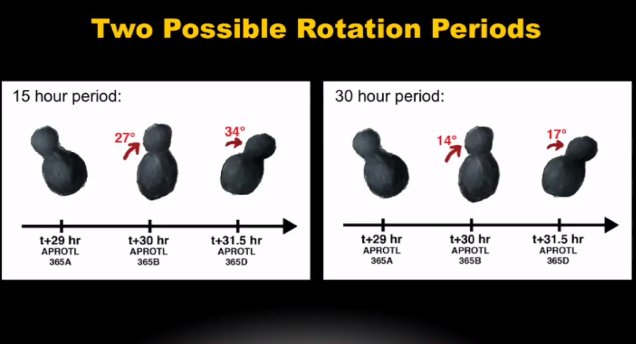 As NH approached Ultima Thule, it showed an anomaly. It didn’t vary in brightness as much as they expected as it rotated. 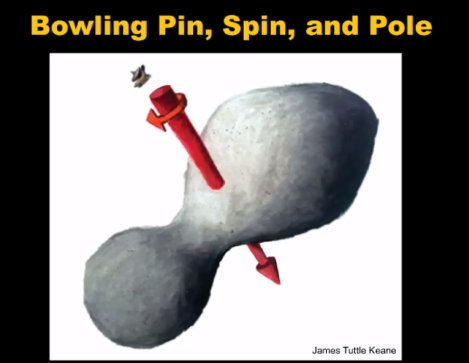 This turned out to be due to two things:

The axis of rotation was pointed almost, but not quite towards the probe as it approached.

The other was to be revealed on January the 2nd at the next press conference:

It looks a little like a less battered Comet 67P to me. 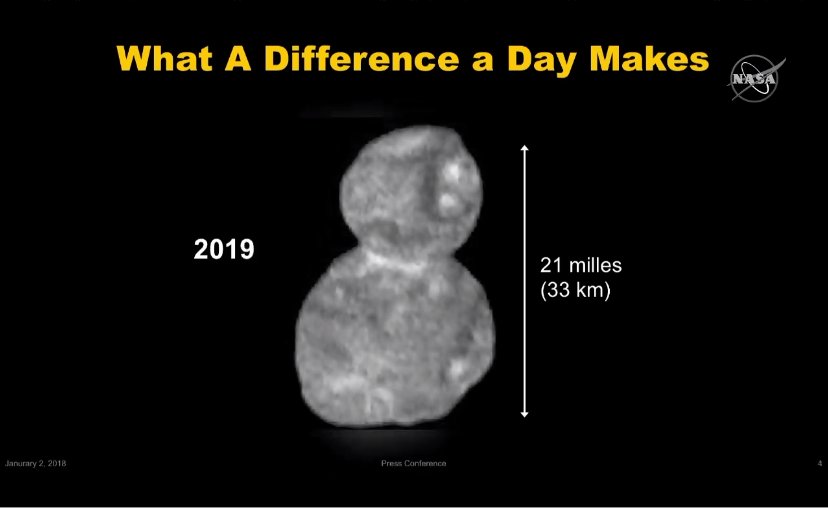 It was two actually two spherical objects, which formed separately, but came together gently and joined together. 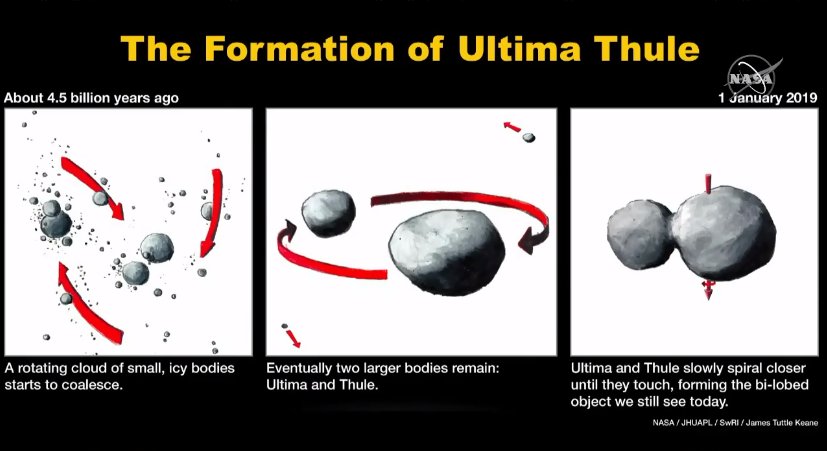 The smaller component they now called Thule, the larger Ultima.

It was also double the size of the estimate the day before, 21 miles at its widest.

Colour data showed that both portions of the object were similar in colour. Red! 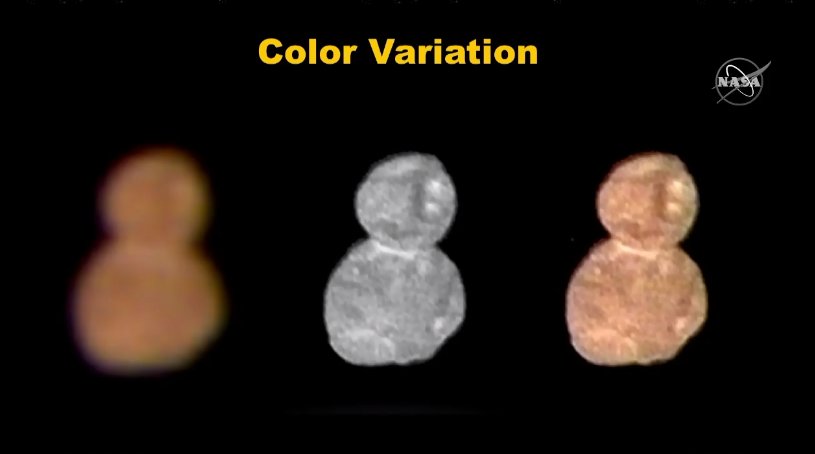 Some variations in brightness were seen and some hints of surface detail. 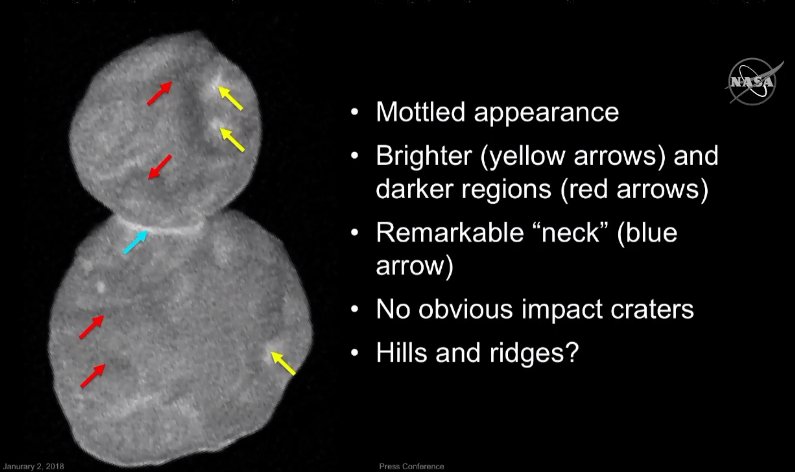 This image was taken with the Sun behind HD. There are no shadows. Any features, such as impact craters, or anything else do not show up very well at this illumination. This is a little bit like trying to see details in Moon craters at full moon. 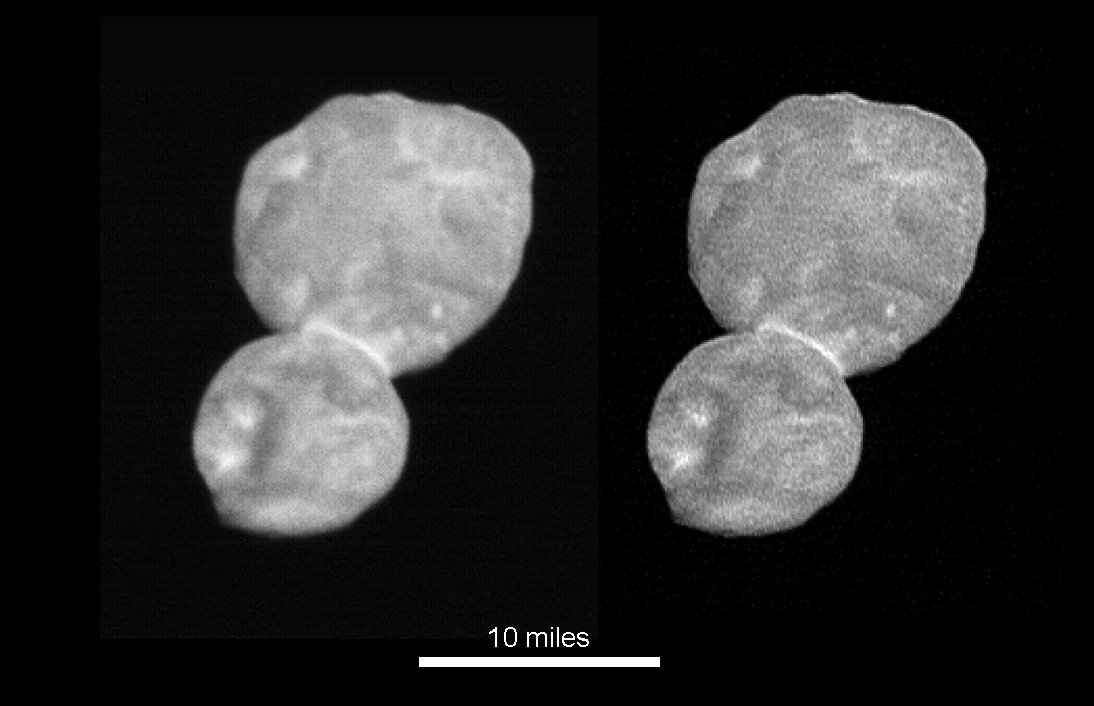 I am sure more spectacular details will follow as more images are returned with a better illumination angle and taken much closer to the object. Ultima Thule should fill the whole frame in some of the closest images.

Brian May, being the stereo image guru he is, made us a 3D image from a couple of the returned images.
It can be downloaded from his Web site:
https://brianmay.com/brian/brianssb/brianssbjan19a.html#03 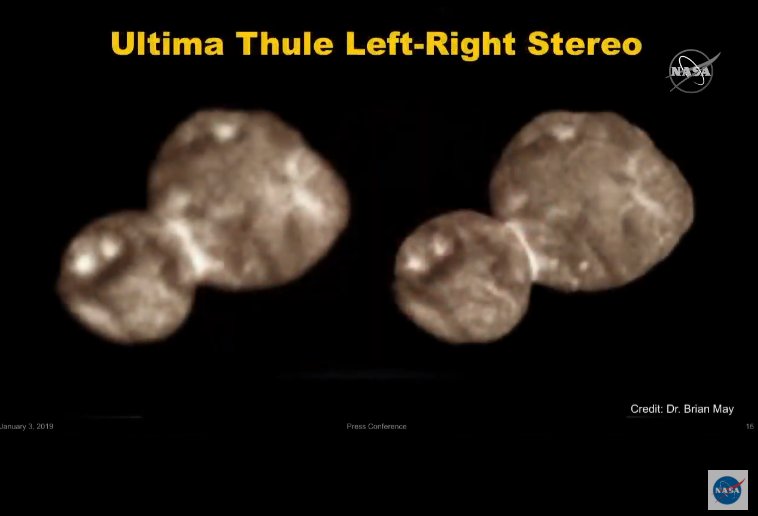 Can’t do the cross-eyed thing?
Grab your funky red-green glasses to view this one. 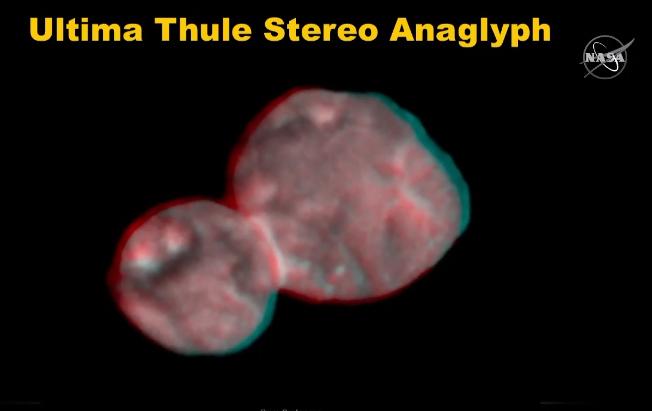 How big is Ultima Thule?
Here it is compared to Pluto. It’s tiny by comparison. 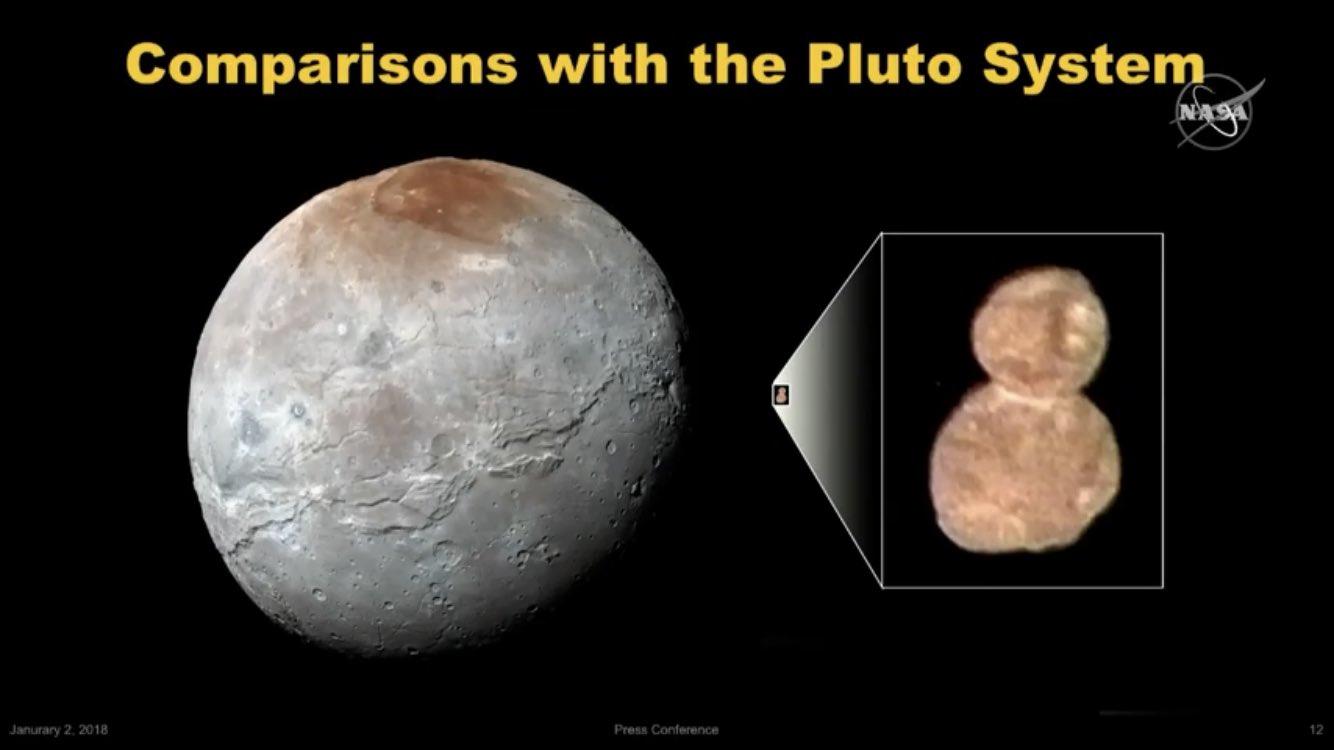 And here it is over London.
If you want to pop it over your favourite place, follow this link. https://t.co/pU2TMsssq5 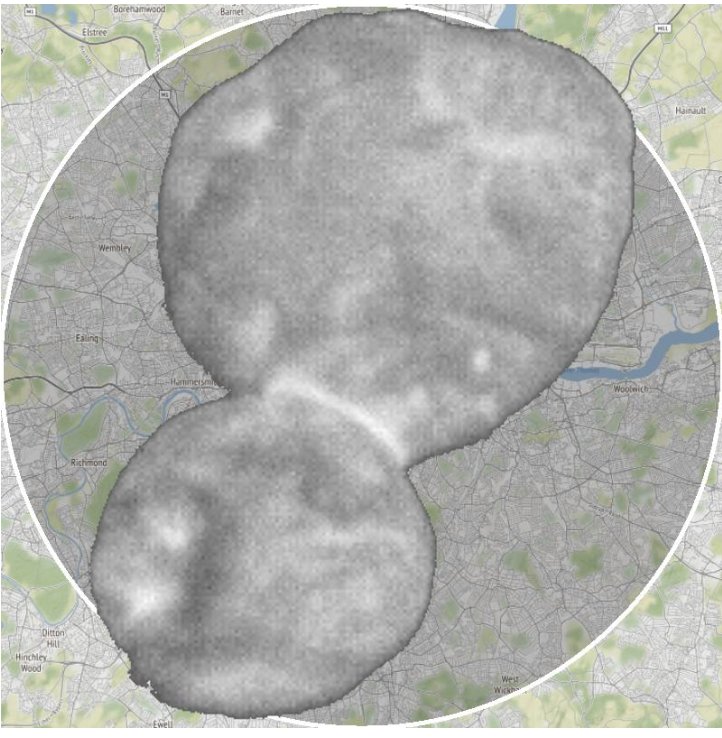 Unfortunately, NH is now behind The Sun (4th January) so data will not be able to be returned for about 5 days. But I for one just can’t wait and see what great higher resolution images and data will be returned and will totally change our understanding of these remote objects and Comets. Let’s keep our fingers hope that they get permission to send NH off to explore yet another object way off in the outer edges of our solar system and suitable candidate can be found for it to explore.

All in all it has once again been a fantastic great job by all the NH team. Many congratulations to Alan Stern and all the crew.

For now, I’ll leave you with the full frame image that was used for some of these images.
It looks great in a wide field of space way out there in The Kuiper Belt. 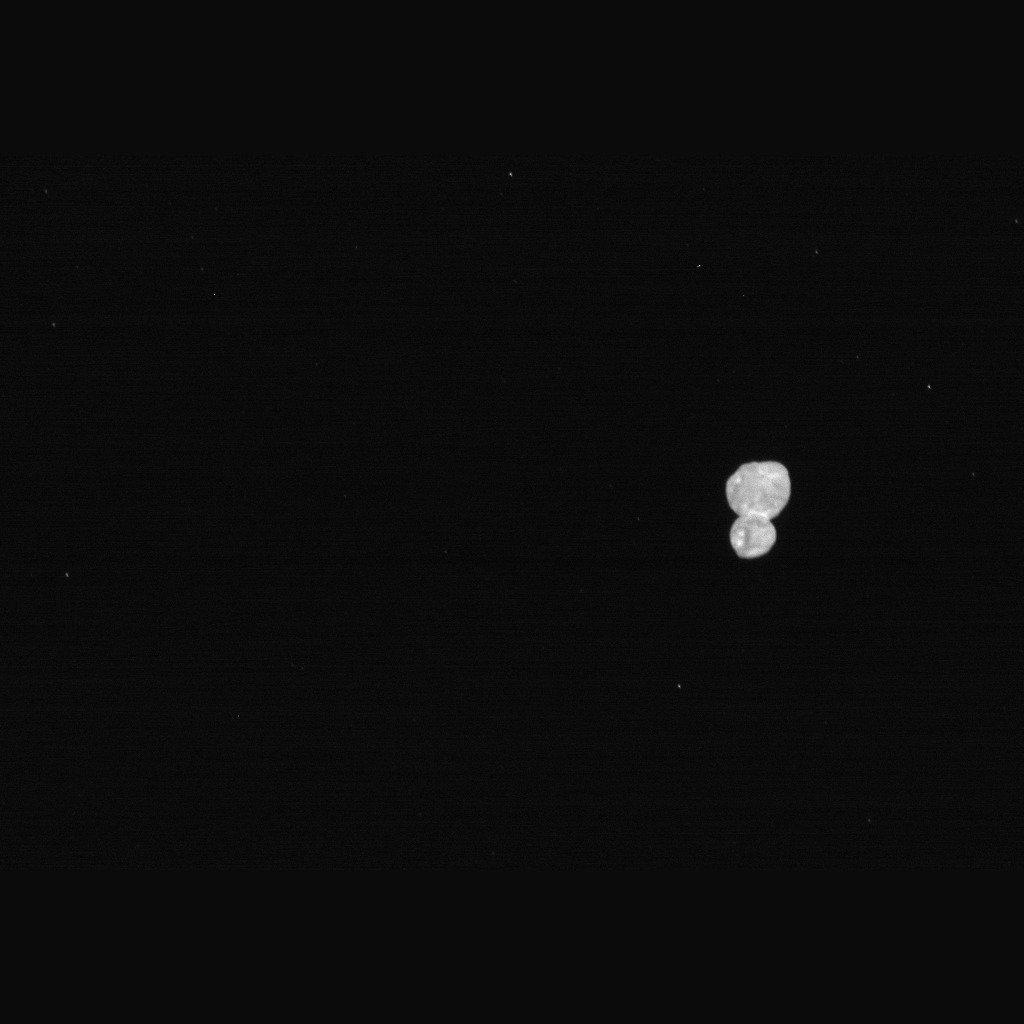