The morning of the predicted Mercury transit on Monday the 11th of November looked bleak.
In fact it was absolutely pouring with rain.

However, the forecast was for an improving outlook for the afternoon, so we can always keep everything crossed and hope for the best.

As the morning progressed, the rain stopped and looked like it was getting a little bit brighter.
My fingers got whiter as I crossed them even harder.
Slowly some blue patches started to appear, and The Sun was better sighted through thin cloud. 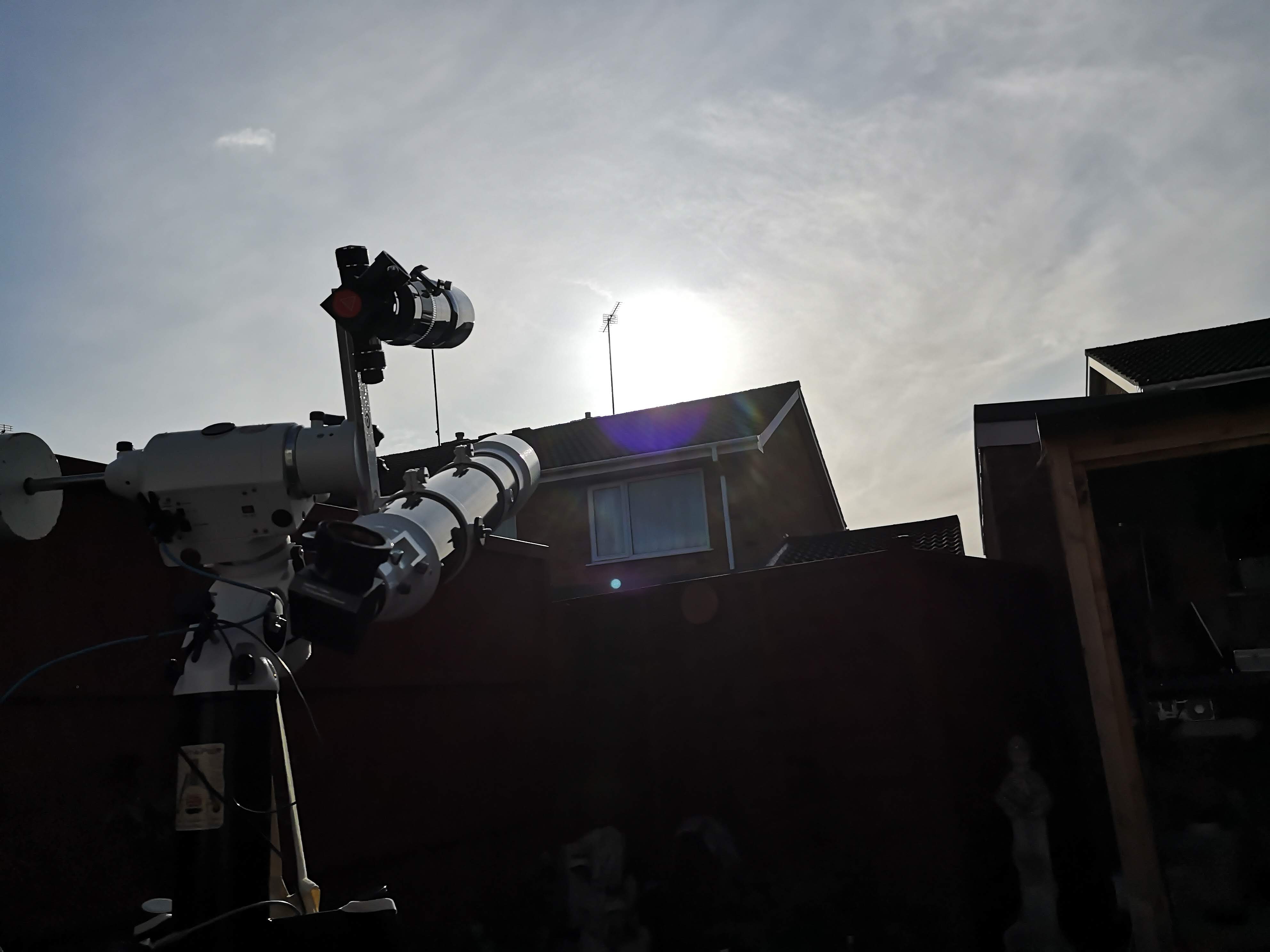 By the time I had set up, at about 20 minutes to 12, there were big enough gaps in the cloud to get some great views of The Sun at both wavelengths.
A Sundog heralded the improving conditions. 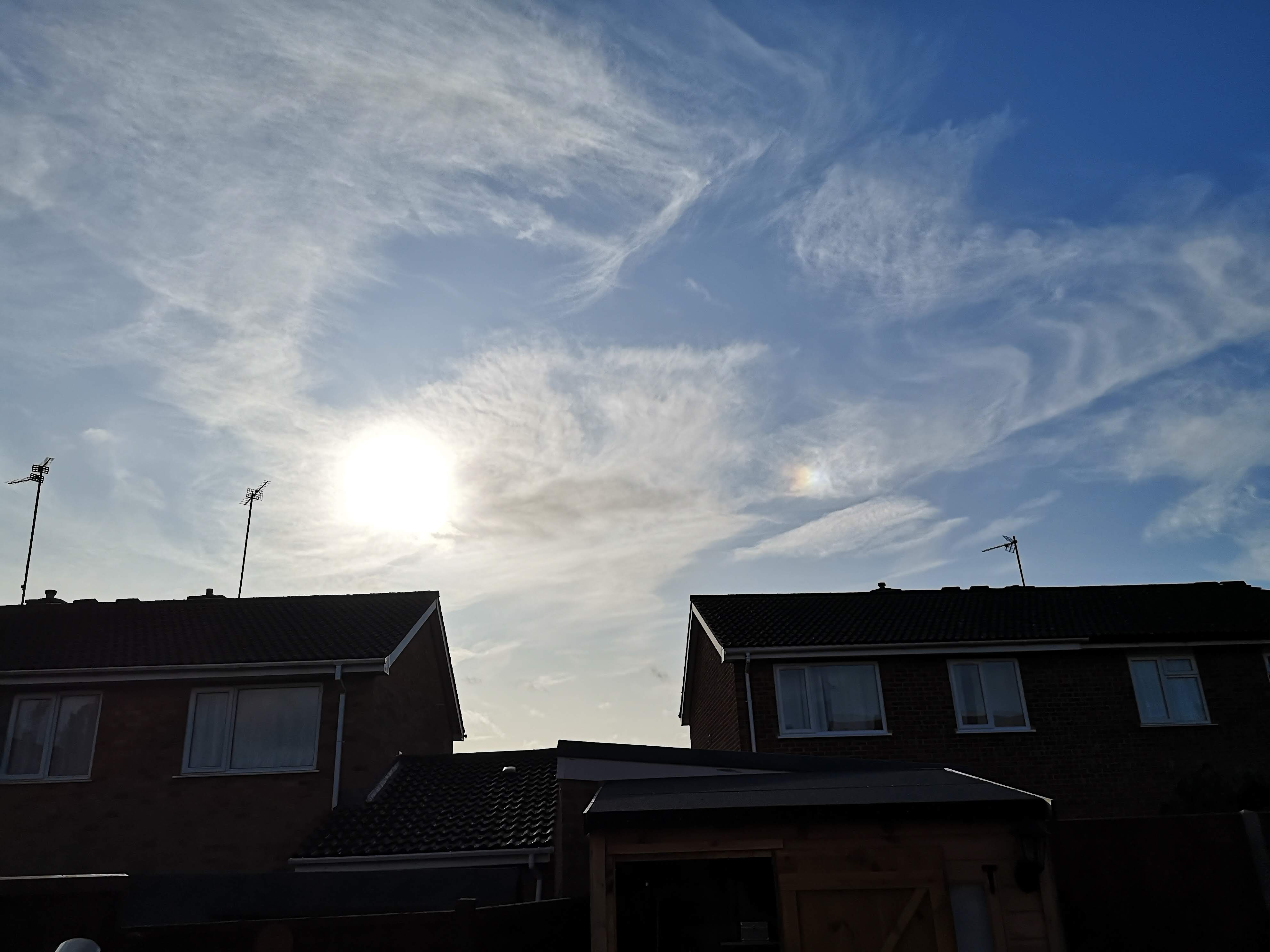 The Sun, of course, being at minimum showed absolutely no sunspots on its face. It was completely blank in white light.
Some nice prominences and some chromosphere details were visible in Ha.

Just after 12:35, this was about to change. The Moon sized planet Mercury was due to start trying, and failing, due to its size, to eclipse The Sun.
Its tiny disk would soon start to protrude onto the disk. I just hoped that with the small field of view available I had got the Quark pointed at the right part of the Sun’s disk.

The anticipation mounted as my great friend Kevin Earp joined me in the garden.
His house and neighbouring tree would block the view from his house.

Kev bought along his DSLR and Baader filter to try and capture the event.

The skies looked much bluer by this time, but scudding clouds towards the south kept covering the Sun as the seconds ticked by.
However, the temperature had dropped considerably and strong cold gusts of wind kept wobbling the scope.

In the moments around first contact, the pitch black edge of the diminutive planet could just be seen protruding into the Ha view.
We took turns at the eyepiece to witness the ingress of the planet onto The Sun’s disk.
Due to the bigger size of the Chromosphere compared to the Photosphere, it could be seen in Ha just before intruding into the white light view.

It was very interesting switching between both views to see how the view of the planets progress differed in the two different wavelengths. All too soon, the exciting part was over and the tiny black dot moved away from the limb.

At this point I set up the webcam to start taking images.
The seeing was fairly wobbly and clouds still kept interfering interrupting the imaging.

To ensure that Mercury’s movement didn’t blur its image, I reduced the AVI capture time to just 20 seconds.

Kev helped me to focus and we both set about taking our images. Kev with his DSLR and telephoto lens in white light.
Me with the Quark in Ha.

We both took a shot of the screen with our mobile phones, just in case the clouds obscured the rest of the event. My first image came off the camera and I quickly processed it while taking some more.

I was knocked absolutely knocked out at the result (right).
The image of Mercury was very sharply defined.

I was hoping to capture a number of images to produce an animation of the planets movement, but a lot of the captures were ruined by clouds. But I carried on regardless.

Kev had rattled off a number of images and could see Mercury in his images.
They were especially sharp after learning how to use the mirror lock-up on his camera. 😉

We had to move the mount closer to the house as by this time The Sun was heading towards the neighbours roof and would soon disappear behind it.

Kev also tried a few images in white light using the ED80 with his mono webcam. A little while after, the clouds once again started to close in, and The Sun slipped beneath the roof and the event for us was over.

We weren’t worried as we’d had a great time sharing these moments and very much enjoyed the afternoon.

So another cuppa was due to warm the hands and sit and a good old chat in the warm before packing away.

It had been a great day.

Oh, and by the way, I was well chuffed to get enough images to produce a short animation:

To end the day nicely, there was a very brief display of Mammatus Clouds over Raunds just after sunset.