So, the big question is:
Does the External aerial on the ASIAIR Pro Plus (AAP+) make the WiFi Signal Stronger?
From what I have seen on the two clear nights I’ve had, that is a resounding YES!

I connected to the AAP+’s WiFi and using the ASIAIR App managed to get it Activated with no issues.
It told me to connect to the Home WiFI and download the activation to the device from the Internet.
I then re-connected to the now activated devices WiFi.
I then used the AAP App to connect the AAP+ to my home WiFi, and set it into Station Mode.

Once I did this, it picked up an IP address on my home network. So far, so good!

I then tried using the Android Emulator LDPlayer on my PC to connect using the ASIAIR app.
It could not connect directly, but as I had made a note of the IP address in my home router, I added this manually and everything was connected.
After doing this, it connected first time, every time.

This was also true for any of the mobile Android devices I used which were connected to my home network.

I put in all the details of the accessories attached. All went really smoothly.
Now just got to get it all attached to my setup, ready for action.

It was clear the night I received it, so although it was a bit murky, I thought I’d have a go anyway and put it thorough its paces: Once problem I had is that the slightly different configuration of the AAP+ made it a little bit more awkward where it was mounted on the finder shoe. So I have now ordered the clamp so I can mount it in a better position and orientation. Plus it’ll be more secure, behind the guidescope on the top dovetail.

Once set up, all the accessories were connected and with no hitches it was very quickly up and running.

The EQDIR cable connected to my EQ6 and I was also able to connect to the mount using EQMOD with SkySafari. This software often has more up-to-date comets in the database than the ASIAIR App, so is an extremely useful addition to the weaponry when tracking down your prey.

All I had to do now was wait for it to get dark.

I could just about see Deneb in the bright twilight, so I sent the scope to it.

As I had come to expect from my old AAP, it dutifully pointed the scope near to the star, where I stopped the slew and was able to manually move the scope onto the star, so I could start to get the main camera and guide camera focused.
Once done, I took another image, got the AAP+ to plate solve, then GOTO Deneb again.
It slightly adjusted its position and then displayed an image of Deneb, right slap-bang in the centre of the screen. Once it was dark enough, I took the scope on a quick tour of a few objects that night, to test the GOTO capabilities.
All the searches were performed flawlessly. Each object was perfectly positioned each and every time after a quick plate solve.

Holding down the mouse or finger on the screen bought up the GOTO circle.
This allowed me to easily reposition the object on the cameras field of view when required.

The auto-focuser worked really well, so I refocused using the Hydrogen Alpha filter.

I set it up to tell the camera to chug out some quick Ha images.

The multi-star auto-guiding was an absolute dream. Afterwards, I noticed a few problems that caused by the user (ID10T error) that I needed to fix.
(As you might be able to tell from the Crescent Nebula image above).

So a few nights later on the next clear night, with a bright gibbous Moon, and another murky night, I decided to concentrate on a single bright cluster.

This was Messier 11, the Wild Duck Cluster in Scutum.
I took LRGB images of the cluster and the results, considering the conditions, it all came out quite well.
I’d never seen the V-shaped flight of ducks in this cluster until now. So what do I think about the AAP+?

The AAP Pro completely transformed my imaging.
I have absolutely loved it since I was first given it to have a play with this time last year.
I loved the functionality that it has so much, I just had to buy it.

The AAP+ can only build on that as ZWO start to add new functions.

This will be the way I will be taking my images and tracking down comets from now on.

I didn’t experience any signal drop-outs on both evenings.
The external aerial definitely makes the signal a lot stronger and gives a much more stable connection on my home network.

The AAP+ was accessible and controllable from all my mobile devices and LDPLayer on the PC across my home network, wherever I was in the house or garden.
This will makes it invaluable for me for live-streaming images of objects across the Internet.
Just to note, my home WiFi has boosters to reach to the bottom of our fairly small garden.

One problem I did encounter was when I was using an older Power supply.
When all my devices, camera, focuser etc, were connected, the AAP+ would not start properly and its WiFi light did not come on.
Once these were removed, the AAP+ started OK and the devices could be reconnected and looked like they were working.
But this was down to the power supply being used not supplying enough power, not the AAP+ itself.
Make sure you use a recommended power supply, not one from well known general stores online shops or flea markets.
These frequently cause the device to run erratically, despite being labelled as the correct voltage / rating etc.

Talking of Power, There seems to be some confusion as to whether or not you can power a mount through one of the power ports.
Some people haven’t reported experiencing any problems when they have done this.
I originally did this, but have since have moved to powering my AAP+ and mount separately, just in case it causes any problems or damages the AAP+ or Mount.

Features I haven’t tried with the AAP+
Polar alignment. But it worked extremely well with the AAP Pro.
Video Mode.
Live Mode. (I much prefer to stack my subs after the event anyway, but this may change…).

Is it worth getting one?
If you haven’t got one and have ZWO Cameras, or you have the original AAP, then it is definitely worthwhile getting one, or upgrading.
If you already have the AAP Pro and not experiencing any connectivity problems, I do not think that the AAP+ offers that much in additional features from an upgrade as yet. BUT! The device has had some significant changes under the bonnet.
This should allow ZWO to make additional improvements and add lots of new features as it develops the product further.
It does look like they are extremely keen to do this going forward, so it will only be a matter of time before some new functions are added.

All versions of the AAP only work with ZWO cameras and many DSLR’s.
If your CCD or CMOS cameras are of another make, they will not work.
Is it really worth getting one and having to change your cameras to achieve this sort of functionality?
In this case a different solution will probably work best for you.
A list of tested DSLR’s is shown here: 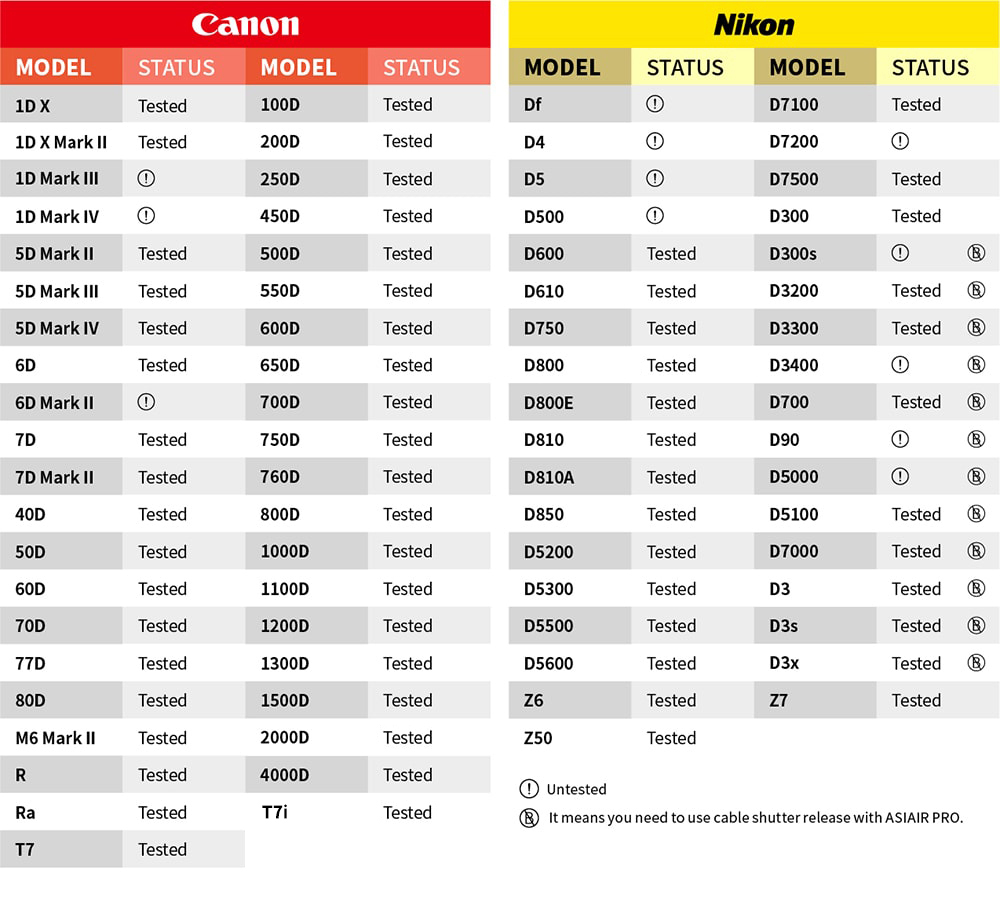 So, if you want one, when are they expected to be available?
ZWO are reporting that pre-sales placed with them will be sent out sometime during November.
https://astronomy-imaging-camera.com/product/asiair-plus

If you have any questions that you think I might be able to help with, please do give me a shout, as I’m happy to help others if I can.
dave@star-gazing.co.uk