With a fairly bright comet C/2021 A1 (Leonard) developing very nicely in the eastern morning sky, we will have limited time before if dives below the horizon.
As a result, the usual clouds have interrupted proceedings, making it difficult, if not impossible to image.

But I’ve been doing astronomy for so long now, so I no longer think there is a personal attack on my enjoyment of astronomy and imaging.
I absolutely KNOW there is!

This morning was a typical case.
I looked out of the window at 4:00am. It was mostly clear.
Big clear patches with some cloud around, so looked very promising.

I got up and set up the scope.
By the time it was all up and running, the large gaps had got a lot smaller.
10 minutes later it was completely overcast, then started to rain. TYPICAL!
I covered everything over, and hung on in there.

It stopped raining, then some passing larger clear patches allowed me to get the camera focused and latch onto the comet, which by 5am, had just cleared the neighbours roof.

With clouds still drifting by, I captured a few claggy images.
These showed that the comet was moving rapidly against the background stars.

I could only do up to a 10 second exposure before it started looking visibly trailed.

About an hour before the sky was to start brightening in the east, the skies cleared from the west, eventually unveiling the comet properly.
It was easily visible in 10x50binoculars.

So the imaging game was now full on.

As well as my main rig, I also set up the Stellamira 90mm triplet on my old Astrotrac and took some other images using my Nikon D5100 camera.

With both rigs capturing images, I left them running and made a cuppa.

Once the sky got too bright to image any more, I took my dark frames and packed away.
Now to see what I had actually captured after I processed the images.
I have posted the resulting images below.

Yes, this hobby and the weather / Bright Moon / Light pollution / Lack of sleep etc. can be extremely frustrating at times.

But, with a little bot of perseverance and patience, when it all comes together I hope that you can see why we do this crazy hobby.
What a buzz! 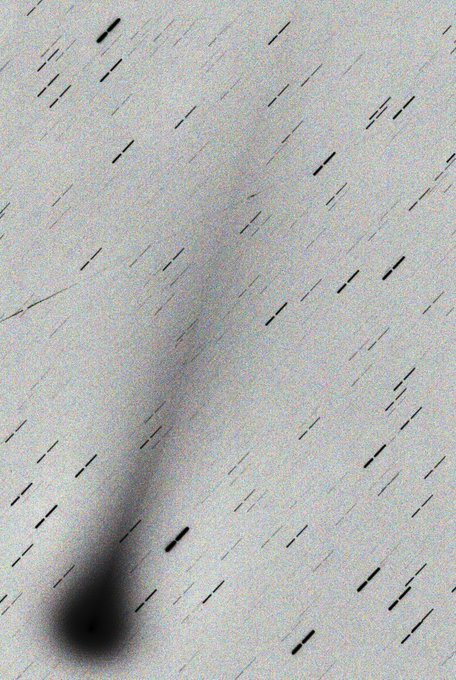 Comet Leonard is really shifting this morning. If I get another go at this before it disappears, I'm going to have to try and track the comet to get longer exposures to bring out more detail. pic.twitter.com/RsAl0zmQxn