Unless you’ve been living under a rock for the last few weeks, you probably realise that there is a spectacular comet on display at the moment.
It’s Comet C/2020 F3 (NEOWISE).

It’s so far north that it is visible from the UK throughout the night.
As the evening gets dark, the comet can be seen in the north-north-west, fairly low down, but a very easy naked eye object.

Here’s my latest YouTube video on finding the comet:

So as long as you are looking in the right direction, you should not miss it.

The comet is currently in the lower part of the constellation of Ursa Major, The Great Bear just by the front paws.

On the 17th of July, it clouded over in the northern sky just before the sky started to darken. Typical!
So instead of staying close to home, I packed everything into the car and ventured out south to hopefully get a view of it and bag some more images.

Only 7 miles from home, I found myself parked up at the side of a country road within the North Bedfordshire villages area with a clear view towards the north.

The comet was now well above the low clouds, so I very quickly setup the two driven mounts, doing a very rough and ready polar alignment on each one. The sky still wan’t totally dark, but I I started capturing subs.

As the sky darkened the extent of the dust tail could be seen. It was so long.
One the sky was totally dark, I could follow it for at least 8 or 9 degrees, using averted vision.

It was a fine sight through binoculars, the pseudo-nucleus appearing star-like and the tail visible across the whole field of view and just outside, so probably about 6 degrees or so. Funny that the naked eye could see a lot more.

There were still some interfering clouds, but I started rattling off shot after shot.
The main driven mount was carrying a 72mm refractor with my Nikon D750 full-frame DSLR capturing close shots to try and capture detail in the ion tail. This had shown some lovely red colouration a few days ago.

The second more flimsy driven mount had a Nikon D5100 DSLR with a variety of fixed and zoom lenses to capture wider fields of view to capture the complete extent of the dust and ion tails and some wide angle star fields around the comet.

The sky seemed to go very clear at one point, but there was always some thin cloud hovering around the comet, and scudding in front of the comet, making it a real challenge to capture really clean subs. But I persevered.

I was absolutely gob-smacked at how long the tail was coming out in my images.
This confirmed what I thought I could see with the naked eye.

I continued a variety of shots until by 1am the clouds finally won the battle.
I watched and imaged the ISS pass over and then packed up for the night.

The animation at the bottom shows material moving along the ion tail.

This was created from 40 reasonably clear subs.
The subs were stacked in groups of 10 to create 4 individual images.

The four images were then put together into the animated GIF. 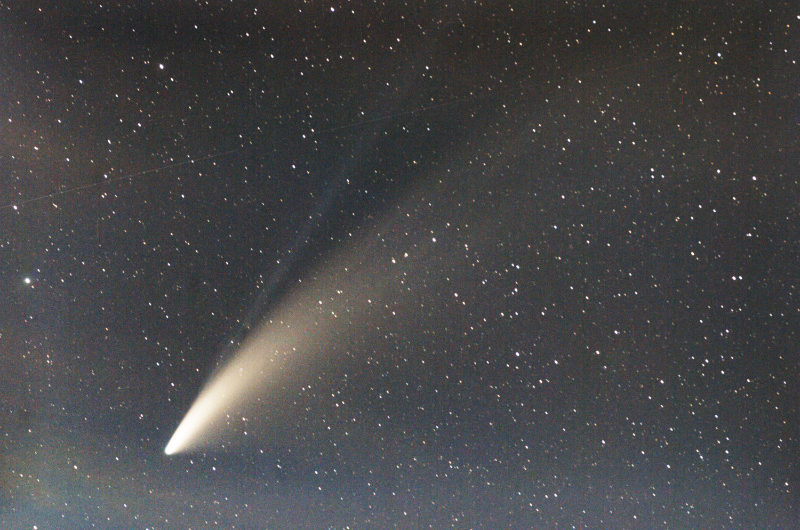